This article explores the effects of various space radiation environments and their impact on spaceflight mission profiles. To understand the effects of radiation on electronic systems and components it is useful to first consider the source of the radiation.

Space radiation consists almost entirely of particles, including electrons, protons and energetic heavy ions. Most originate from the solar wind or solar flares and they are anisotropic (directionally dependent) in nature, yielding different values when measured in different directions. Superimposed on this particle flux are very high-energy protons and heavy ions, which are isotropic (uniform in all orientations), yielding the same value when measured in different directions. The moderate energy particles are trapped by the Earth’s magnetic field in the Van Allen belts, and depending on a satellite’s orbit, the belts may cause most of the ionizing radiation damage.

So how do these particles interact with the materials used in electronic devices? Solar electrons and protons are very abundant and cause ionization in materials. In a simplified model, low and moderate energy charged particles generate hole-electron pairs in the thermal oxides used in integrated circuits. The electron mobility in these oxides is very high and any applied electric field sweeps the electrons out of the oxide in picoseconds. The hole mobility is much less so a much greater proportion of holes get trapped. The net result of these asymmetrical trapping dynamics is positive volume charging of dielectric layers and degradation of both bipolar and MOS circuit devices.

Figure 1 shows that when the particle energy is increased, the particle abundance decreases, with the abundance versus energy curve spanning 25 orders of magnitude and culminating in very low fluxes of relativistic TeV heavy ions. The effects of the abundant lower energy particles are uniform through the volume of the IC, but high-energy heavy ions cause single event effects (SEE), defined as the interaction of a single energetic ion with a silicon device. 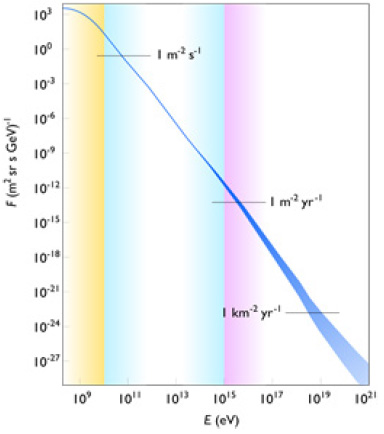 Energy is lost by these high-energy particles as they pass through the semiconductor lattice, generating a track of hole-electron pairs as shown in Figure 2. 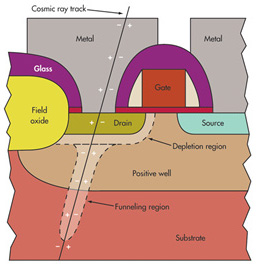 Figure 2: Schematic cross section of a MOS device and the interaction of an energetic heavy ion with the device structure. Note the incoming particle track, the funneling region and the collection of the generated charge by the reverse-biased drain to body junction. (Source: CERN).

The most commonly used SEE unit is the linear energy transfer (LET) of the incoming ion, which equates to the energy loss (dE/dx) per unit track length for a given material density and is expressed in MeV.cm2/mg. The key takeaway: shielding is ineffective as it only filters out the low energy end of the spectrum. The high-energy ion flux is unaffected, and mitigation must be performed at the IC and system levels.

As we’ve learned, space radiation effects on electronic devices are an important design consideration. Radiation causes problems ranging from operational malfunctions to severe physical damage to the devices and even catastrophic mission failure.

The TID exposure is measured in rads. The term rad (radiationabsorbed dose) quantifies the total radiation exposure of a material. One rad(Si) is defined as one Joule per kilogram, or 100 erg per gram. The energy absorption is specific to the material being irradiated, so the common unit in silicon technology becomes the rad(Si). The total dose radiation threshold of a device is the minimum level of rad(Si) that will cause device failure. Typical commercial devices can survive around 5krads before functional failure occurs.

SEE can lead to system-level performance issues including disruption, degradation, and destruction. For predictable and reliable space operation, electronic components should be characterized to determine their SEE response in the space environment of interest.

Since the end of NASA’s Space Shuttle program, we have seen a strong trend towards increased commercial participation in launches and missions. Private industry is increasingly interested in lower cost alternatives to high reliability ICs. Some of the alternatives include military-grade Class Q parts, commercial off the shelf (COTS) parts and even automotive-grade parts. The leading edge of this trend is in commercial launch vehicles that do not use high-grade ICs due to short mission time and emphasis on cost control.

The objectives of private industry are to reduce the cost and increase the reliability of access to space, and make a profit. This model demands simplicity, reliability and sharply reduced cost throughout the entire launch vehicle, payload and launch infrastructure system.

Companies addressing the small satellite market are taking a strong interest in Renesas Electronics’ cost-effective radiationtolerant products. They feature small-form-factor surface mount plastic packages using Nickel/Palladium/Gold (Ni/Pd/Au) lead finishes. These ICs undergo one-time characterization during development for TID up to 30krad (Si), SEE with a LET up to 43 MeV.cm2/mg, and military temperature range of -55°C to +125°C. The parts receive AEC-Q100 like qualification with testing up to 2,000 hours of burn-in, 500 temperature cycles, and package moisture sensitivity testing. This is much different versus higher cost traditional radiation-hardened products in large ceramic packages.

Commercial parts are routinely ‘upscreened’ through implementation of some or all of the screens for a given grade but the resulting costs are typically equal or even greater than parts screened by the manufacturer. Radiation hardness is a key issue here, and one that some COTS parts may have problems with, including radiation effects that range from total dose degradation of performance parameters, which can cause system degradation, to destructive single event effects, which can be mission ending.

Designers build COTS systems with stringent cost limitations and a mixture of COTS and high reliability parts. The hi-rel parts go into mission critical sockets and the COTS parts are used in the rest of the system. The COTS parts are qualified on a sampling basis with some lots passing and the failing lots discarded. Overall this may be a cost-effective method, but its risk and unpredictability are not consistent with high stakes missions such as communications satellites and national security payloads.

The effects of space radiation are caused by particles interacting with the materials used in electronic devices, and truly rigorous radiation tests would replicate these particle environments. Electron and proton testing is inconvenient and expensive, though, so the space community has historically used gamma rays for ground testing. It’s a simulation, but Renesas Electronics (Intersil) has more than 60 years of correlation and high confidence using high-energy photons to predict part response to charged particles.

Responding to customer demand, Renesas Electronics introduced an industry-leading low-dose-rate hardness assurance program, which performs wafer-by-wafer acceptance testing at both low and high dose rate using on-site production irradiators. This program has been in operation since 2012 and it has been widely accepted by customers.

Josh Broline is the Director of Marketing and Applications for the Space/Hi-Rel Products with Renesas Electronics America. He is responsible for developing and driving strategic plans and product roadmaps for radiation-hardened and radiation tolerant products for spaceflight applications. Mr. Broline has published numerous article in various industry magazines. He holds a BSEE from the University of Central Florida and an MBA from Florida Institute of Technology.

Nick van Vonno is a principal engineer for Space/Hi-Rel Products with Renesas Electronics America. He has 48 years of service with Renesas Intersil Space Products and its predecessors in a number of technical and management posts. He is currently responsible for radiation effects research, customer support, and product technology development. Mr. Van Vonno holds a BSEE from the University of Florida and is a Life Senior Member of IEEE. He received the IEEE Radiation Effects Award in 2009.

Infineon Expands its Expertise with Rompower 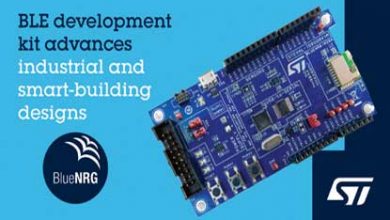 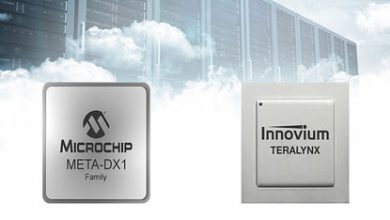