The future is technology! As we make slow progressions into the futuristic world, there is hardly anything currently that isn’t thinking from the perspective of being technologically forward with the one thing that never goes out of style. Fashion Industry is one of the most propelling sectors in the world right now. The fashion has taken a step forward with the adaptation of technology for the big events and even being innovative with the apparel and the showcase of the same.  3D Printing, Big Data, AR and VR, etc., are being used to curate designs and clothing that make more than just fashion statement. What we are looking further in the future is that the clothing and accessories that will be innovated would be tech efficient and would solve problems for instance, the t-shirts with LED lighting was so popular once but now, the fashion tech has brought a t-shirt with a wearable device that monitors heart rates and scans through other health problems of the user. Some research suggests that the combination of mixing technology into fashion is going to reduce the use of smartphones. We are yet to see how that will work in the future. 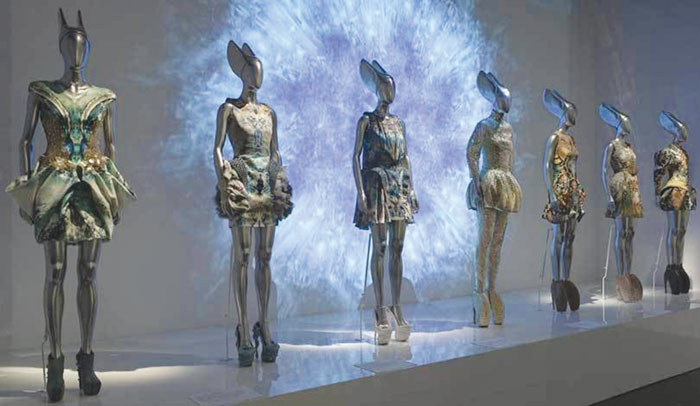 The fashion media was on fire when the news of the Milan Fashion Week replacing models with drones at the runway to showcase their latest handbags. But that was just the beginning. Fashion Tech has turned runways into a platform for creativity and to emphasize that tech can transform the way generations look into fashion.

The recipe here is to innovate something that is valuable and trendy at the same time. Closely examining the few trends that the Fashion industries are dressing up with:

Fashion and Technology is a lethal combination. The future fashion tech is all about making statements in an efficient way. Last year, the fashion industry saw the most creative and bizarre trends. Some companies like Nike, came up with the HyperAdapt 1.0 self-lacing shoes-each shoe has a sensor, battery, motor, and cable system that adjusts fit based on an algorithmic pressure equation. When a foot is inserted, the shoe tightens automatically until it senses friction points. There is pair of buttons near the tongue to adjust fit as needed.

The Google and Levi’s Project, “Project Jacquard”, was released last September and it has changed what a simple denim jacket can do. The jacket was a standard Levi’s denim trucker built to sync with a smartphone. Once a phone is connected, a system of smart fibers woven throughout the jacket (in tandem with a wireless “tag” remote) allow users to control smartphone functions through gesture controls, including just tapping on the jacket’s wrists to pause music or set navigation.

Fashion industry is a never at a rest, so there’s been researches and experiments being conducted every second. One great emerging innovation that we don’t know much about but the idea seems intriguing is the drug dispensing bra. Sarah Da Costa, the designer behind the kind thought of prevention of breast cancer for all the women who cannot orally take the drug. The designer worked closely with a  specialist in microbial biotechnology and developed a way for the drug to be absorbed into the skin via fabric, through a process known as “micro-encapsulation”. The drug-dispensing bra allows women to absorb the drug through infused “Foxleaf” inserts which are changed on a monthly basis.

The many other cases of melding fashion with tech includes, rain pallet clothing- the clothing and accessories range that changes color according to the pH of rain; the handbags and clutches with sensors that senses any kind of dangers to women and many more.

The fusion of fashion and technology paves way for clothing that is efficient and comfortable. It will also eliminate the usage of devices like smartphones and IPods while on the move.

Zac Posen and fashion house Marchesa which used IBM’s Watson supercomputer to conceive a ‘cognitive dress’. The dress lights up and changes colour based on social media activity, engagements, and overall emotional feedback.

Sacchio also insists that that soon enough we’ll have clothes that collect health and fitness data without the need for auxiliary devices such as smartwatches, smartphones, or wearable bands, as “being on the body, connected fabrics can best read the body.”

Scientists from Nanyang Technological University Singapore (NTU Singapore) have created a customizable, fabric-like power source that can be cut, folded or stretched without losing its function. Being highly stretchable, these flexible power sources are promising next-generation ‘fabric’ energy storage devices that could be integrated into wearable electronics.

Led by Professor Chen Xiaodong, Associate Chair at the School of Materials Science & Engineering, the team reported in the journal Advanced Materials how they have created the wearable power source. Simply put, the supercapacitor works like a fast-charging battery and can be recharged many times.

But, the secret lies in how the supercapacitor is constructed. The device is customizable or “editable,” meaning its structure and shape can be changed after it is manufactured while retaining its function as a power source. Existing stretchable supercapacitors are made into predetermined designs and structures, but the new invention can be stretched multi-directionally and is less likely to be mismatched when it is joined up to other electrical components.

The new supercapacitor, when edited into a honeycomb-like structure, has the ability to store an electrical charge four times higher than most existing stretchable supercapacitors. In addition, when stretched to four times its original length, it maintains nearly 98 percent of the initial ability to store electrical energy, even after 10,000 stretch-and-release cycles. The editable supercapacitor is made of strengthened manganese dioxide nanowire composite material. While manganese dioxide is a common material for supercapacitors, the ultralong nanowire structure, strengthened with a network of carbon nanotubes and nanocellulose fibres, allows the electrodes to withstand the associated strains during the customisation process. 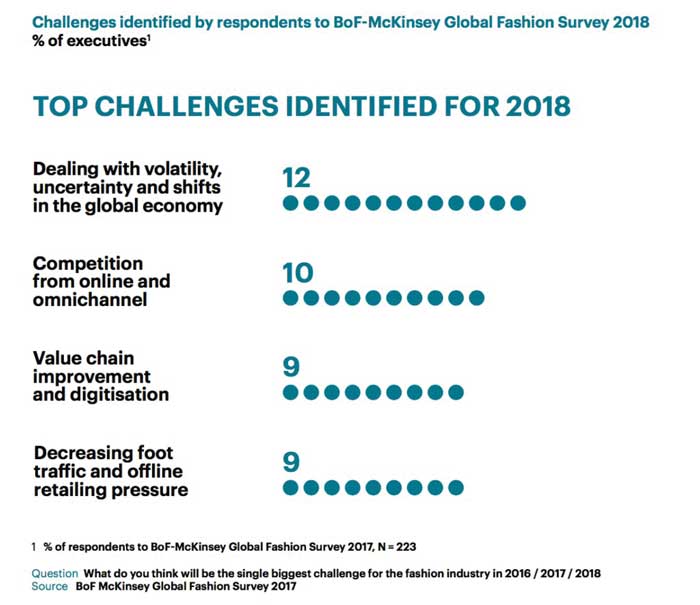 Gone are the days when Western markets were the global economic stronghold. Economic growth is shifting from mature regions in the West to emerging markets in the South and East. According to McKinsey FashionScope, by 2018 more than half of apparel and footwear sales will originate outside of Europe and North America. Rapidly growing cities in emerging markets are particularly important growth centres for the fashion industry. Many incumbents with developed countries as their core markets face a stagnating sales outlook and profitability, and must seek new pockets of growth.

Furthermore, adoption of disruptive technologies like advanced robotics, mobile internet, advanced analytics, virtual- and augmented reality and artificial intelligence is accelerating, with the potential to disrupt entire industries – including fashion. And with increased digital cross-border trade, it becomes harder for “local heroes” with an average value proposition to compete when anyone who is best at what they do in theory become a global champion. 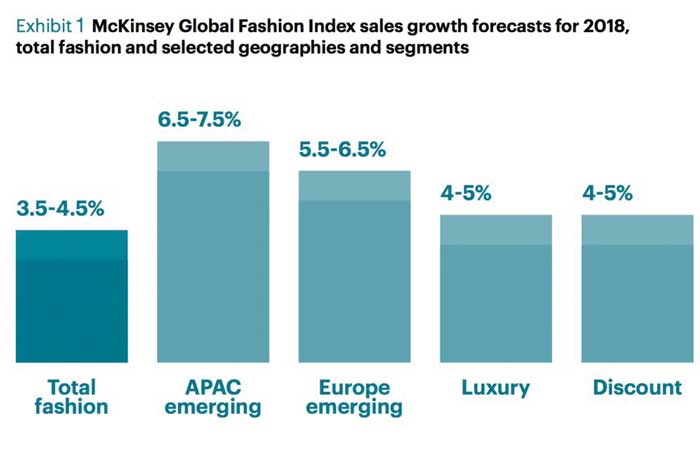 Engineers are threading circuitry into clothes to create comfortable devices that could make electronic fashion the future of the textiles industry. Smart textiles, where electronics are incorporated into fabrics, have been around for some time, from sensor-laden shirts that keep you cool, to dresses packed with LEDs. Despite these innovations, even the most determined shopper would struggle to find this type of fashion on the high street. Dr. Ana Neves, a researcher from the University of Exeter in the UK who specialises in wearable electronics, thinks bulky design is partly to blame. “The user needs to feel comfortable,” she said. “Most smart textiles still rely on integrating conventional electronics onto fabrics, attaching them to the surface and removing them when the textile needs to be washed.” As part of the E-TEX project, Dr. Neves and her colleagues are using a different strategy, by building devices directly into the fibres of textiles using flexible and lightweight components. A t-shirt, for example, could be designed to monitor the wearer’s heartbeat without the need for embedded electronics.

The idea for the project came about in 2014 when Dr. Neves developed a technique to make textile fibres conduct electricity by coating them with graphene. She then decided to apply the method to incorporate electronics into clothing. The properties of graphene are ideal for use in textiles. The semi-metal is just a few atoms thick, making it extremely lightweight, and it can be bent and even stretched while remaining robust. It is also transparent, which makes it suitable for light-emitting displays. Furthermore, applying a coating to fabrics should be easy to integrate into existing clothing production. “If we simply add a step or two, the chances of this type of technology being adopted will be significantly higher than if we tell a manufacturer that they need to completely reformulate their production lines,” said Dr. Neves. So far, the team has built a type of fabric display using light-emitting materials. By sandwiching doped zinc sulphide between two layers of graphene – which act as conductors – the researchers made it glow. They then incorporated this set-up into an array of fibres, structured like a woven textile, to create a fabric wherein the intersection of fibres lit up like pixels when plugged into a power source. Changing the light-emitting materials produces different colours. “It can be used to make a coat or a rucksack visible at a distance,” said Dr. Neves. “For example, if a child is lost, activating the light emitting fibres would increase visibility, helping search and rescue teams to spot them from a helicopter.” In the future, the E-TEX team hopes to harvest energy from a person’s movements so that the fabrics can be self-powered. As flexible, plastic solar cells become more efficient, they could also be incorporated as a power source.

There’s so much that might alter the fashion industry. Efforts are being made continuously to make the fashion more entwined to the latest technologies. Fashion worldwide would be transformed and everyone will have apparels and accessories that make more than a statement. As for the semiconductor and ICT industries, fashion would be the next big thing to opt for because we are talking fashion that is efficient and sustainable at the same time. It is a profitable area as the era that we live in has become an extension of the on-demand economy for fashion – “I need it fast and I need it now”, so it’s not just the designers and fashion enthusiasts. 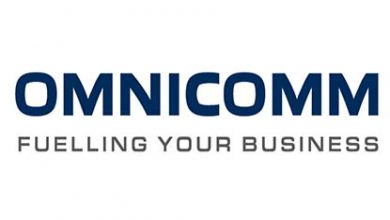 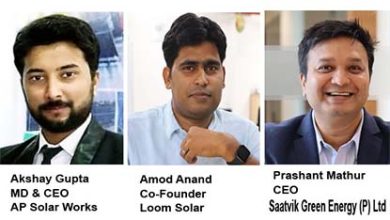 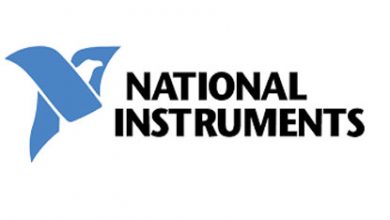 NI Announces Addition of Two New Directors to the NI Board 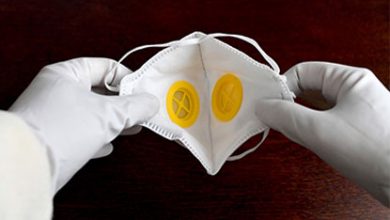 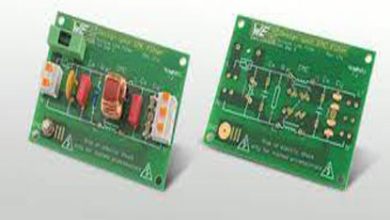